The CORMETECH COMET® is a next generation oxidation catalyst that allows coal-fired power plants to meet stringent mercury emission standards, such as Mercury and Air Toxics Standards (MATS), while reducing the cost of activated carbon injection (ACI) solutions.

How Does the Oxidation Catalyst Work?

Coal-fired units with an SCR and wet-FGD system can often leverage the mercury removal co-benefit in the form of mercury oxidation that occurs in the SCR. COMET maximizes the conversion of elemental mercury (Hg0) to a water-soluble oxidized (Hg2+) form that can be captured by absorption in the downstream wet FGD. Low HCl content in the fuel/flue gas and high flue gas temperatures can limit the conversion of Hg0 to Hg2+. COMET catalyst is specifically designed for high conversion of Hg0 to Hg2+ (as HgCl2) under a broad range of operating conditions, including particularly challenging high temperature and/or low halogen concentration conditions.

CORMETECH's Mercury Assurance Testing Reactor System (MATRS) is a state-of-the-art micro-reactor which is used for parametric studies of both fresh and deactivated catalyst. 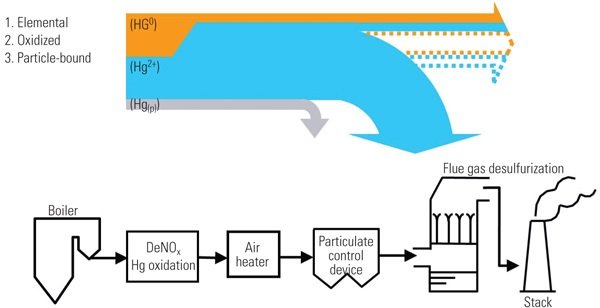 Triple Play - Mercury capture points for the three forms of mercury in flue gas are illustrated. The gray arrow represents the particulate mercury removed by the particulate control device. The blue arrow represents the oxidized mercury that is removed in the FGD system. At the stack, the "total" arrow (the sum of the solid blue, solid orange, dotted blue, and dotted orange lines) represents the amount of mercury that leaves the stack without an SCR and wet-FGD present. The solid blue plus the solid gold lines denote the smaller portion of Hg0 and Hg2+ that leaves the stack when the co-benefits of the SCR and wet-FGD are considered.

COMET's potential to oxidize Hg as a co-benefit in plants with a wet-FGD system is an effective and economical method to achieve compliance with MATS limits. Coal-fired units can use its existing SCR and wet-FGD equipment to increase mercury capture merely by modifying its current SCR catalyst management plan and incorporating a new advanced Hg oxidation catalyst. This approach eliminates the need to invest in expensive mercury capture equipment add-ons and the on-going cost of sorbent purchases.